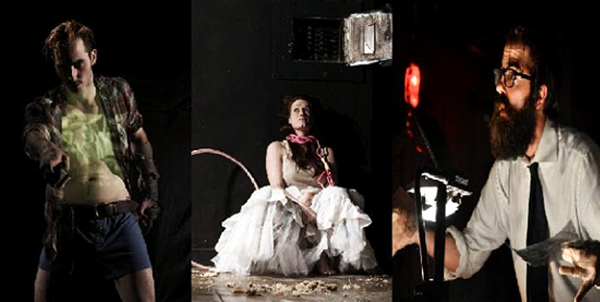 THE BATTLE PLAYS TRILOGY was a three-year / three-piece performance installation that examined the isolation of the American-psyche-in-crisis through genre, medium, and history.

BRING ME THE HEAD OF JOHN FORD (2008, The Brick Theater – Brooklyn) mixed elements of Noh and Greek mystery plays with 4 projector screens and 2 televisions against one speed-addicted video store clerk in a synchronized-riff edit of a classic Spaghetti Western, into which he projects all of his innermost desires and memories in an obsessive ritual set in a trailer park in West, Texas.

ANTIGONE WITH THE WIND (2009, Monkey Town – Brooklyn) combined a surround-sound audio book recording of Margaret Mitchell’s Pulitzer Prize winning novel with densely-layered environmental compositions, 70’s femme-disco pop, and a chorus of barking dogs, all as a backdrop for an intricately rehearsed cope-mechanism work-out exercise performed by a little girl locked in a basement by an unknown abductor in suburban Atlanta.