▲ Adam Belvo (Associate Producer / Actor) is a NYC based performer and producer. After graduating Summa Cum Laude from the University of South Florida with a Bachelor’s Degree in theater performance, he and several friends founded the Tampa Bay based Hat Trick Theater Company, and was involved in their inaugural season. In his time in Tampa, he was also a part of the Best of The Bay Award winning production of Eugene Ionesco’s The Chairs, playing the role of the Orator. Since moving to New York City in the winter of 2005, he has immersed himself in the off and off-off-Broadway theater community, actively participating in over 50 productions, both onstage and behind the scenes. In 2007, he joined Working Man’s Clothes Productions as the company’s finance manager. With WMC, he acted in and produced 5 short play festivals, 4 main stage shows, and organized and curated over a dozen staged readings and performance art pieces, including the NYC Fringe production of Desiree Burch’s 52 Man Pickup.  Most recently, Working Man’s Clothes’ production of She Like Girls won the 2009 GLAAD award for best off-off Broadway show. A proud member of Ad Hoc Economy, Adam has worked with them in the Bushwick, Brooklyn arts scene for the past years as an actor, technician, and producer and toured nationally with their production of BUTCHER HOLLER HERE WE COME. Other NYC work includes roles as Father Nathan Shourd in the NYIT Award winning IN VESTMENTS, Danny in DANNY AND THE DEEP BLUE SEA, Georges in HAZARD A LITTLE DEATH (Planet Connections Festival: Best Actor Award Winner), Jaques in AS YOU LIKE IT, & THE EXECUTION OF MRS. COTTON. He is also a founding Executive Producer of the Brooklyn based theater company spit&vigor (www.spitnvigor.com). 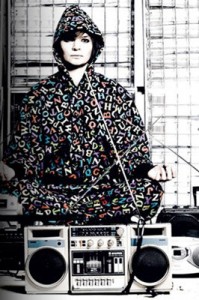 ▲ Marilyn Mithra-Stone (Executive Director / Founding Member) is a transplant from the UK and the Executive Director of the Ad Hoc Economy. She has worked as a director, assistant director, and managing director for various underground and breakthrough performances in London including GRAFTING AND BUDDING with Sheila Ghelani at BAC, THE THREE BILLY GOATS GRUFF (Garlic Theater), THE HOT ZONE (Conspirator’s Kitchen) and FIGHT FACE (with Sophie Woolley) at Lyric Hammersmith. She was an associate for programming for Barbican’s BITE’07 theater selections and assistant directed Fecund at the Chelsea Theater. As a director she has several shows that have premiered at Camden People’s Theater including URASHIMA TARO, LATE NIGHT’S SHIFTING SAND, TRACE [FISH] 46, and most recently, LITERATURE DO at Camden Fringe. After attending the Royal Academy of Dramatic Art as an ensemble actress, she switched roads and studied directing at LAMDA. She did a year long internship for management at the Royal Court Theater and has made a career both in theater administration and music, recently recording her third album, MITHRATHOPE23, to be released in summer 2016 in the UK. After living in NYC and producing 8 Ad Hoc Economy plays including THE BATTLEPLAYS TRILOGY, BUTCHER HOLLER HERE WE COME, KILL DEVIL HILLS, and PONTIAC FIREDBIRD VARIATIONS, she’s now living with her fiancé and daughter in Cape Town, South Africa where she is involved in community-building arts projects funded by No Borders Coalition. Upcoming: an Emerging Environmental Artists Grant from the UK which will send her to Antarctica in 2019-2020 to collaborate on wildlife / geologic observations for an international album. 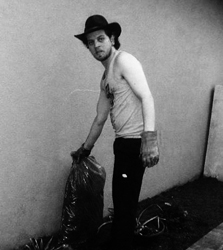 ▲ Adam Laten Willson (Head Dramaturg / Associate Marketing Director / Actor) hails from all four corners of the map: an itinerant flaneur, a fleur mal, but his flame is long in expiration. Interests include literary and dramatic unconventionalities, prevail over adversity, the victory of absurdity, and the most morbid of human passions. He has been involved with Ad Hoc Economy since 2009, collaborating on over 10 plays in capacities of assistant director, dramaturge, associate producer, actor, writer, and video editor. With AE his acting credits include The Baron in ADVENTURES IN THE OK SKIN TRADE, Carm in ALABAMA GODDAM Pascal in PSYCHOJELLY, Brackenbury in PONTIAC FIREDBIRD VARIATIONS, Assaryan in MORE SONGS FROM THE NEOFASCISTS…, The King in COLOR TVS EN TIJUANA, and Leander Pope in BUTCHER HOLLER HERE WE COME. Adam additionally appeared in NATIONAL DIET OF JAPAN with Ad Hoc’s undergroundzero festival show at P.S.122 in NYC. AE’s BLACK BOX project was his conception and Adam participated as one of the 5 writers on the experimental reading. In addition to co-writing an online opera, Adam is completing his Master’s Degree in Glasgow, Scotland UK where he is working on a dissertation relating to Comparative Literature studies and Russian Fiction. 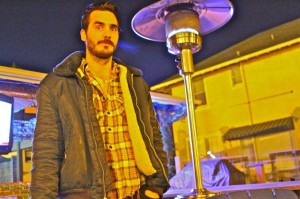 ▲ Michael Mason (Associate Artistic Director / Founding Member / Marketing Director) Born and bred in Beaumont Tx Michael Mason is an Actor, Director, and Producer of Theatre. He studied theatre @ Texas State University as well as the @ Actor Studio in conjunction with the New School University of New York. While in NYC he was a founding member of two theatre groups: Working Mans Clothes and Ad Hoc Economy. He was the a resident Artist for The Search Party in Austin Tx from 2008-2009. He has preformed @ Haus der Kulturen der Welt in Berlin, P.S.122, 3LD, Galapagos Arts Center, Dixon Place, The Clurman Theatre, The Brick, The Tank Ohio Theater, the Obie-Award winning Ice Factory, and American Place Theatre. He has also recently moved back to his home town of Beaumont Tx and created ‘Ad Hoc Beaumont’ a D.I.Y. Southeast Texas based theatre group the brings New Works to the area, and seeks to make theatre more accessible to a non-theatre going audience in the area. Most notably, ‘Ad Hoc Beaumont’ was featured in 2018 in American Theatre Magazine for their production of WAITING FOR GODOT at a Regional Correctional Institution.  Recent projects include: The Klingon Opera ‘U’ produced by Zeebelt Theatre at the Haus der Kulturen der Welt in Berlin. ‘MY AIM IS TRUE’ produced by Ad Hoc Beaumont at the Spindletop Gladys City BoomTown Museum in Beaumont Tx, TRUE WEST, A STREETCAR NAMED DESIRE, AUGUST: OSAGE COUNTY all with Beaumont Community Players, and YEAR OF THE ROOSTER with Ad Hoc Beaumont. Co-Artistic Director and Rep Actor for Aztec’s touring production of BUTCHER HOLLER HERE WE COME where he alternately plays Muskie Pope or Keith Busby. Currently, Michael lives in Los Angeles, California with his wife, Teresa, and dog, Watson. 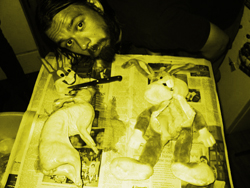 ▲ Karl Newman. (Graphics / Video & Print Support / Founding Member) An Icelandic-American hybrid. Developed an unhealthy fascination with films at an early age.. Bachelor in contemporary literature, master in new media, master of arts education. Prolific creator of music videos/ advertisements/ shorts/ trailers.  Photographer.  Session musician. Sound designer. Editor/cinematographer. (motion) Graphic designer. After grad school and several years in NYC, Karl is currently based in Reyjavik, Iceland. He was most recently seen in Ad Hoc’s productions of NATIONAL DIET OF JAPAN at P.S.122 in NYC and in the role of the Icarus in KILL DEVIL HILLS in Chicago where he acted and was a live stage musician. He provided the video editing/design for the charter Aztec production of “BRING ME THE HEAD OF JOHN FORD” which involved 4 projection screens and 2 synchronized television set feeds. He continues to assist with graphic designs. “Kalli” likes cats, puffins, chewing gum, nebulas and Angela Lansbury. 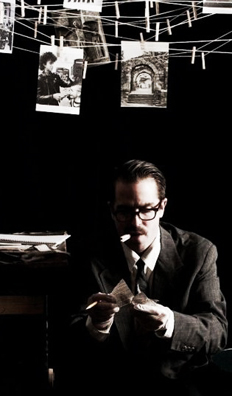 ▲Ryan Dorin (Sound Design / Aesthetic Theory Consultation) is a pianist, composer, sound designer, animator, and music producer. Currently based in his home town of Santa Monica, California, Ryan spent twelve years in New York City completing his Ph.D. in Music Composition at NYU, teaching, performing, producing, music directing, and doing sound design for numerous theater productions productions. Ryan has created music and sound design for nine Ad Hoc Economy productions, most recently being KILL DEVIL HILLS which was presented at Collaboraction in Chicago. Other theatrical collaborations include sound design for Matthew Hancock’s MY AIM IS TRUE  which was performed at the New Orleans Fringe Festival and the Crown Point Festival in New York City, and the Working Man’s Clothes production SHE LIKE GIRLS, which was awarded the 2011 GLAAD award for an off-off Broadway play; ANGELS IN AMERICA: MILLENNIUM APPROACHES and THE GLASS MENAGERIE for the University of Arkansas. As a pianist, Ryan has performed extensively with the Washington Square Contemporary Music Society, as well as other venues and festivals around New York City and up and down the East coast, and has twice been a featured performer at NYU in Florence, Italy. Most recently, Ryan filled in at the last minute performing Gershwin’s RHAPSODY IN BLUE with the Chamber Orchestra of St. Matthews in the Pacific Palisades, California. Ryan’s animated alter ego, the RAYBOY GENIUS has a loyal internet following, as does his animated rock opera, THE ADVENTURES OF HAPPYMAN ON THE RED PLANET, which has also been heard on the radio. 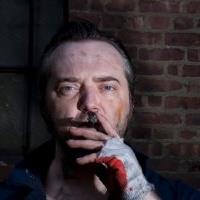 ▲ Isaac Byrne (Honorary Company Member / Actor) spent 13 years in New York City doing indie-theatre in multiple Off and off-off theaters in the city. He has received the New York Innovative Theatre Award for Outstanding Direction twice and productions he has directed have been nominated for a Drama Desk Award, an Off Broadway Alliance award, 25 NYIT awards, and 11 Planet Connection Awards. He also performs regularly with Ad Hoc Economy theatre company in the touring show BUTCHER HOLLER HERE WE COME. He studied acting with renowned acting teachers including Fred Kareman and Matthew Corozine in NYC and Terry Martin in Texas. He has taught acting at the University of the Arts, the New York Film Academy, and the Matthew Corozine Studio. MFA in Theatre: Directing from Texas State University, 2019. www.isaacbyrne.com
Rimons twitter widget by Rimon Habib