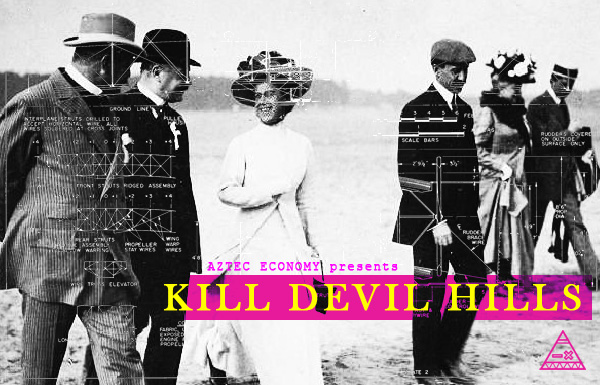 is a live, immersive performance which creates a psychic space to re-imagine the dawn of flying machines. Wilbur is the doubt-ridden, emotionally stunted, one-mechanical-armed, maniacally hard-driven visionary with suicidal tendencies & a nightmare quest (a la Conrad’s ‘Heart of Darkness’) to capture Icarus’ wings and whose success will ultimately be subverted by an Ahab-like legal war against his enemies for creative ownership of their flying machines. Orville is his hard-drinking, fast-scheming, reckless younger brother whose absolute commitment to war against the earth takes him to the brink of paralysis and death. With their pantomime, suit-covered sidekick mute engineer / crash-test-dummy, Cannonball and their stern, proper school-teacher sister, Kate, the brother’s rum vessel becomes a place where war is waged, and ambition and dreams are weighed, and imagination meets death in a hallucinatory mindscape of human achievement and destruction.

in the Heart of Wicker Park!